Immaterial for material
Void for gold

In 1959, the painter Yves Klein established the ritual rules for the transfer of immaterial pictorial sensitivity zones.

With these rules, and more broadly his work, Yves Klein anticipated in art what we are witnessing today, the enhancement of immateriality via blockchain technologies, cryptocurrencies and more precisely NFTs.

By selling areas of sensitivity, void, in exchange for pure gold, then allowing the buyer to become the owner only after the destruction of the sales contract, he radically disrupts the concept of original, authenticity and possession.

Today, blockchain technology achieves a decentralized and secure archiving-process thanks to the resolution of cryptographic puzzles, thus constituting the backbone of a digital space hosting purely conceptual objects created and exchanged for values that are also conceptual.

It seems obvious to us that if Yves Klein were still alive, he would have declared that pure sensibility exists in a blockchain.

Picking up on this concept, Lionel Broye and Gaël Goutard have now created a smartcontract generating an empty space, an immaterial pictorial sensitivity zone in the ethereum blockchain of 1 kilo octets of 0 that can be bought in exchange for 1 kilo of gold.

This zone can be resold but can only be really owned once destroyed. This destruction will be done by the buyer via a « self destruct » command.

The purchaser who has taken possession of the zone will be notified of a time and place where he will be given a unique booklet containing the entire hexadecimal code of the smarcontract as well as the archive of all the previous purchasers who have wished to identify themselves by filling in the signature field during the purchase.

How does BLEU PROFOND work?

BLEU PROFOND is put on sale directly on this site without any intermediary platform.

BLEU PROFOND is available for purchase in Ether by connecting with your wallet directly on this site.
We advise you to use a desktop for your connection via a browser with a Metamask extension or use the integrated browser of Metamask on a smartphone.

When you are connected, your public key is displayed, and you can then purchase BLEU PROFOND at the price indicated in « current value of void ».

Once you are the owner of BLEU PROFOND, you can freely set the selling price, which can not be lower than your purchase price and will automatically incorporate royalties.

BLEU PROFOND can be purchased within a minimum interval of 10 minutes, below this time it is frozen.

When purchasing BLEU PROFOND the owner is asked to leave a signature, which will be printed in the final booklet, made after the destruction of BLEU PROFOND.

If no one buys BLEU PROFOND during one week, it can be permanently destroyed by its owner.

Once BLEU PROFOND is destroyed, it will no longer be available for sale on this site. The last owner will be notified of a date and a place, located in Paris, for the handing-over of the booklet by the authors. During this meeting the identity of the owner will be verified with his wallet.

The different states of BLEU PROFOND

BLEU PROFOND is first of all an interactive smartcontract accessible via a WEB3 website that can be acquired in the form of an NFT.

BLEU PROFOND is also a piece that is available in silkscreen and 3D sculpture.

The Raspberry Pi that was used to tweet BLEU PROFOND is now entirely plated with 24-carat gold.

The smartcontract has been screen printed in 10 copies signed and numbered on ADIRON BLUE 270g paper in 32 x 45 cm format. 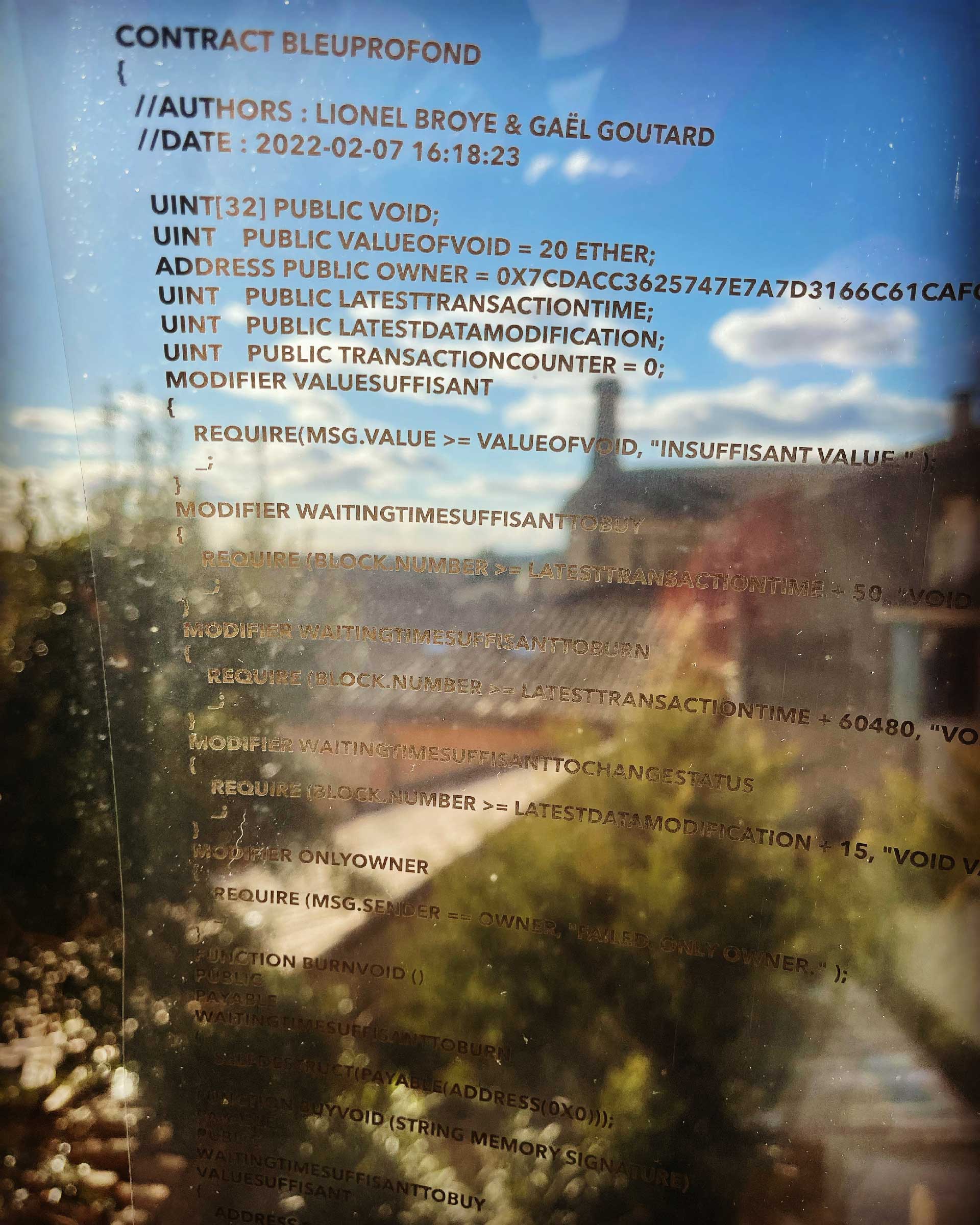 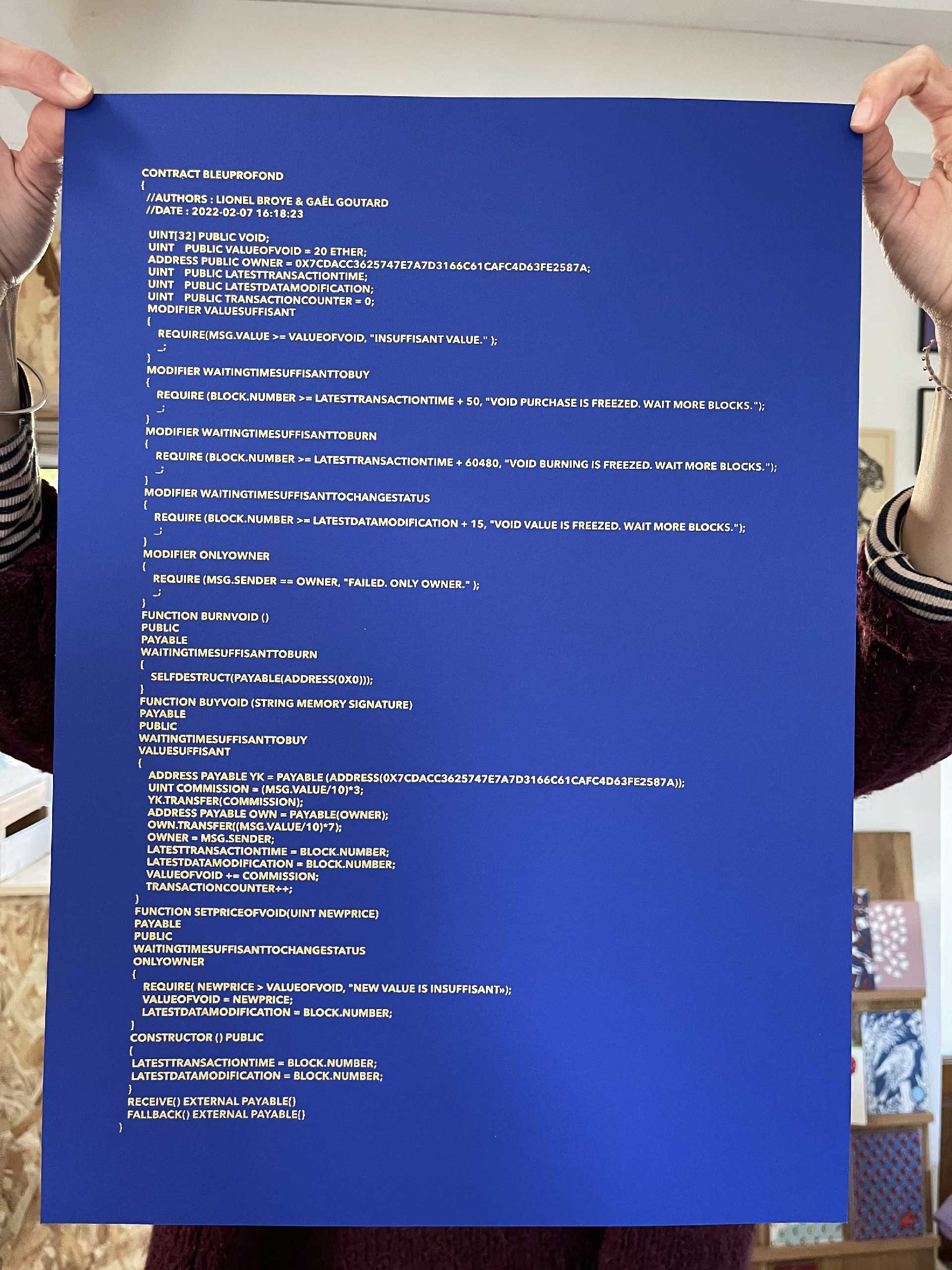 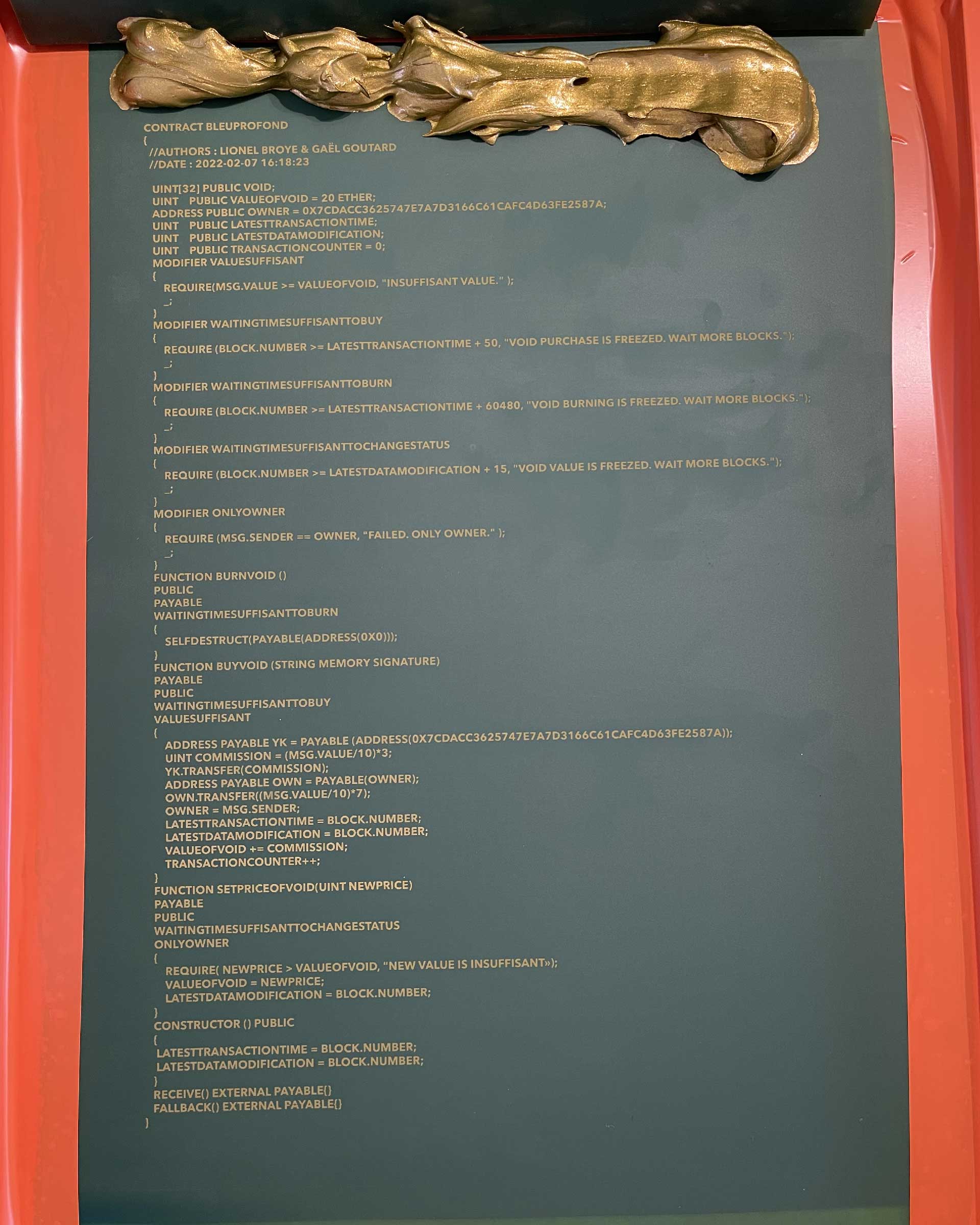 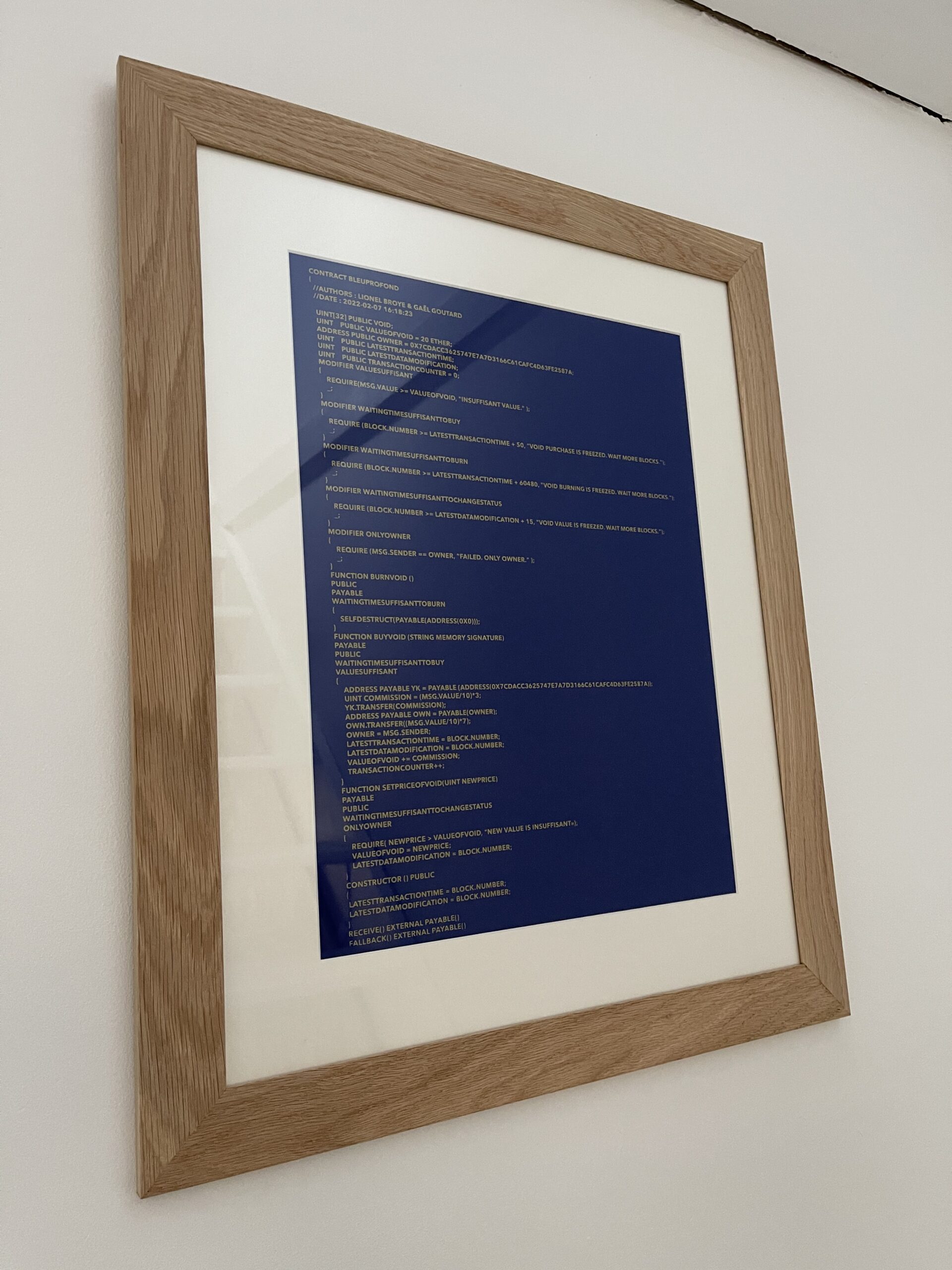 If you wish you can order a signed and numbered print of BLEU PROFOND by using the order form below.